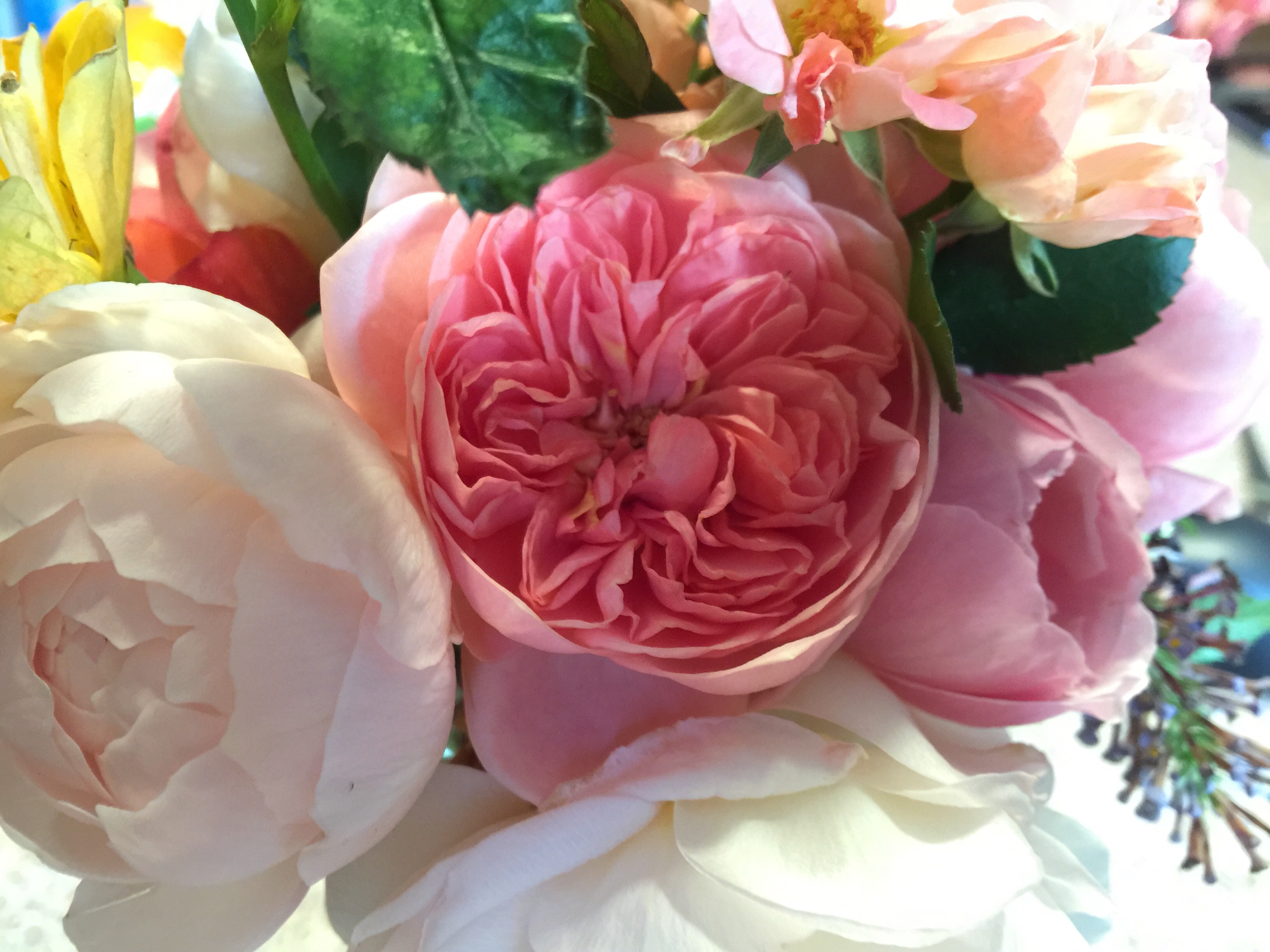 A Boscobel rose bloom stands out in an arrangement of flowers

Boscobel, a recent 2012 introduction by David Austin Roses has finally had a nice flush. After a difficult start, many of the Austin roses I ordered last season didnt fare too well. They were all purchased as bare roots and after they arrived, I potted them up quickly in large black nursery pots that I’ve kept from previous rose purchases. That year’s roses seemed dramatically smaller than ones I had received in previous years, but I potted them up anyway and they all took off rather splendidly. It was at this point however that I made the grave mistake of planting them in a new rose bed I had created in the side yard.

The bed was made over an area that was once paved with large stepping stones. I expected there to be soil underneath, even if it was poor quality soil. Yet to my dismay when I lifted the pavers and dug, I was sorry to find nothing but sand as deep as the shovel would go. I dug almost three feet deep in some areas and never reached soil. So, I needed to not only amend the entire bed, but actually remove the sand and fill it in with store bought soil.

To make a long story short, the Austins roses, which were all on grafted onto Dr. Huey, we’re not happy in the somewhat still sandy soil of the new rose bed. After a few months of decline I realized I would have to pull most of them out, or risk loosing them all. Many of my 9 roses did not survive the move. Lady Emma Hamilton died before I could even try moving her. Molineux was soon lost after the move. Belle Story survived the initial move, but later declined and died. Jubilee Celebration and Princess Alexandra Of Kent are still struggling after the move, and I’m not entirely sure they will make it. Gentle Hermione and Geoff Hamilton seemed to be doing ok in the ground so they were left in the bed and both are still doing ok, Hermione actually doing pretty well. Boscobel on the other has bounced back from the initial move nicely and is thriving in a pot on the patio.

This says a lot about the new David Austin releases as they have recently been focusing on introducing stronger, more disease resistant roses and Boscobel is a good example of this. Not only did it bounce back quickly, but it produced an impressive little flush with rather large, full blooms for being such a small plant.

The large round buds opened to reveal beautifully cupped rosettes packed with petals in a most unique shade of copper pink with deep salmon. Each one measuring about 2.5 inches.

We sincerely hope this rose will be available on Fortuniana one day because this one seems like it will be a good performer in South Florida and David Austin Roses on Fortuniana are still hard to come by.

Boscobal can be purchased online through David Austin Roses or Regan Nursery both on Dr. Huey rootstock.

4 thoughts on “Boscobel Springs To Life”